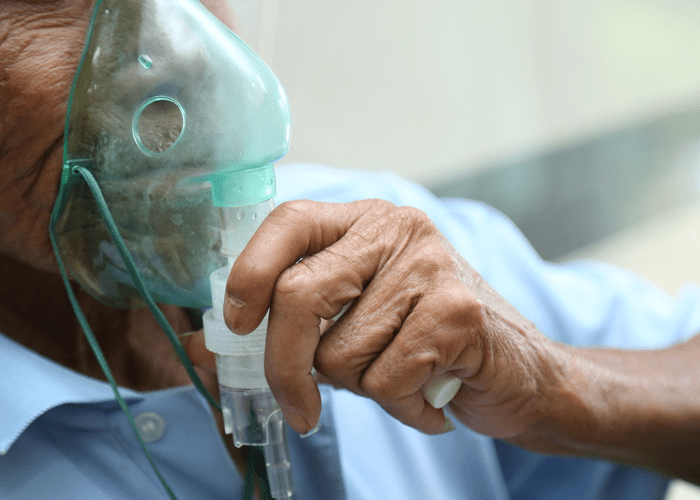 Chronic Obstructive Pulmonary Disease is a chronic (long term) condition causing inflammation in the tissues of the lungs that leads to obstructed airflow. Rather than being a single disease, COPD is an umbrella term for a number of conditions that lead to inflammation of the lungs, including emphysema and chronic bronchitis.

The lungs are two lobes of spongy tissue in the chest and are contained and protected by the ribcage. Air travels down the trachea into a pair of tubes known as bronchi. Each of these tubes services a lobe of the lungs. The bronchi divide into smaller tubes called bronchioles and divide further and terminate in tiny air sacs known as alveoli.

In a normally functioning lung, the alveoli exchange oxygen and carbon dioxide (gas exchange) with the bloodstream through a number of miniscule capillaries. The oxygenated blood is pumped around the body and the carbon dioxide is exhaled.

The alveoli and bronchial tubes have a natural elasticity that helps expel the air in the lungs, but the inflammation of COPD causes these tissues to lose some of this elasticity. This means that some of the carbon dioxide laden air remains left in the lungs, reducing lung capacity.

According to Lung Foundation Australia, Chronic Obstructive Pulmonary Disease is a very common condition in Australia, with around one in seven people over 40 having some form of COPD. Aboriginal and Torres Strait Islander Australians are over two times more likely to develop COPD than any other group. COPD is the second leading cause of avoidable hospitalisation in Australia.

COPD is a progressive disease, meaning that it worsens over time and is currently incurable. With lifestyle change and other management, COPD symptoms can be controlled and people with the condition can experience good quality of life.

The initial symptoms of COPD typically come on gradually over a number of years and may be overlooked as being a factor of aging or being out of shape. In some cases the symptoms won’t be notable until the lung damage has become quite significant.

Common symptoms of COPD include:

In addition to ongoing symptoms, people living with COPD may experience flare ups or exacerbations of symptoms. These worsened symptoms may last for a period of several days before returning to “normal”.

In addition to the symptoms, COPD may also lead to a number of complications, including:

- Heart Disease - for reasons not entirely understood at the moment, people with COPD have a higher risk of developing heart disease, including myocardial infarction (heart attack)

- Collapsed Lung - the trapped air in the lung may develop into an air pocket that may rupture during a coughing fit, causing the lung to deflate

- Hypoxaemia - a lack of oxygen to the brain. May lead to confusion, memory issues and depression

- Withdrawal from Physical Activities - some people with COPD may reduce physical activities to reduce periods of breathlessness. This may lead to a cycle of a reduction in overall fitness making breathlessness more common, leading to a further reduction in activity

The two most common conditions that fall under the umbrella of COPD are emphysema, chronic bronchitis and chronic asthma.

Far and away the most common cause of chronic obstructive pulmonary disease is tobacco smoking. Around 20% to 25% of smokers will develop some form of COPD. While not as likely to develop COPD as current smokers, ex-smokers still have an increased risk of developing the condition.

For a small number of people with COPD, genetics also plays a part. A rare protein disorder known as alpha-1-antitrypsin deficiency (AATD) leaves people with a deficiency in a protein that helps protect the lungs. This lack of protection may lead to the development of a form of emphysema, even if none of the other usual triggers for the development of the condition are present.

Living With and Treatment For COPD

While COPD is progressive and incurable, the condition can be managed through a mixture of medication, lifestyle changes and other measures.

Common medical treatments for COPD include:

No matter the treatment, frequent monitoring and assessment is needed to chart the course of the disease so any changes in treatment can be made to offset the profession of COPD.

In addition to prescribed treatments, there are a number of things that people living with COPD can do to help reduce or minimise COPD symptoms as well as maintain quality of life, including:

Rather than managing symptoms of COPD, the best thing anyone can do to significantly reduce their risk of developing the condition is to quit smoking.

If you need help quitting smoking, or are experiencing a shortness of breath, schedule an appointment to see a doctor .

Does My Child Have Croup?

Croup is the inflammation of trachea (windpipe), the bronchi (the airways to the lungs) and the larynx (voice box), most frequently due to a viral infection. This inflammation causes the airways to narrow and prompts the production of mucus, making breathing difficult and causing a harsh, barking cough.

Does My Child Have Bronchiolitis?

Bronchiolitis is a common form of chest infection in young children and babies that causes inflammation in the bronchioles, the small airways that branch off to the main airways, the bronchi, and connect to the alveoli (air sacs) in the lungs. This inflammation causes air to become trapped, reducing lung capacity, leading to difficulty breathing difficulties, coughing and wheezing.

What Is A Chest Infection?

A chest infection is any infection, typically bacterial or viral, that affects your breathing passages and lungs. The two most common forms of chest infection will affect the bronchi, large air passages that enter the lungs (bronchitis), or affect the alveoli, the small air sacs in the lungs

Everything You Need To Know About Whooping Cough

Whooping cough, also known as pertussis, is a highly contagious respiratory tract infection that is typified by a hacking cough followed by a “whoop” or high pitched sound while drawing breath. Although many types of infection may cause a cough, the cause of pertussis is a bacteria called Bordetella Pertussis.