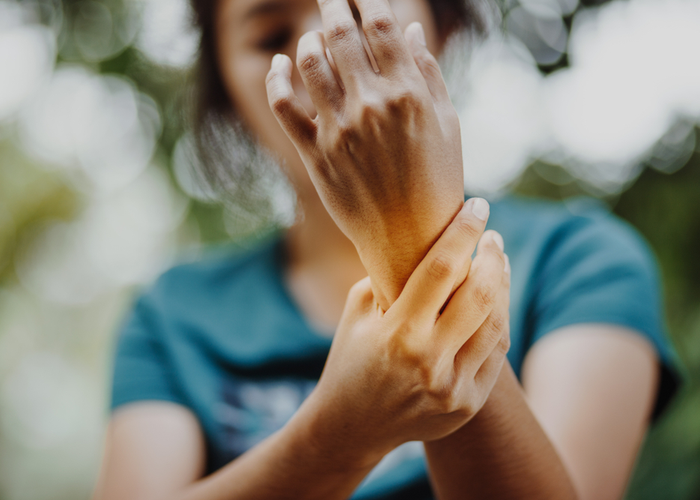 What is Rheumatoid Arthritis?

Rheumatoid arthritis (RA) is a chronic autoimmune condition that causes inflammation and pain in the joints as well as potentially affecting other parts of the body, including the eyes, lungs, heart, blood vessels and skin.

Unlike osteoarthritis, rheumatoid arthritis is not caused by wear and tear on the cartilage between joints, but rather the body’s own immune system attacking the lining of joints, the synovial membrane (synovium). As a result, the synovium becomes inflamed, causing pain and limiting the movement of the joint.

In a healthy person, the synovium produces a lubricating fluid (synovial fluid) that helps the joints move smoothly. In someone with rheumatoid arthritis, the body’s own immune system attacks the cells of the synovium as if they were a foreign invader, such as a virus or bacteria.

When the synovium is attacked it becomes inflamed and the synovial fluid builds up, leading to joint inflammation and pain. This excess fluid also contains chemicals that may cause the breakdown of the bones, cartilage and ligaments that form the joint. The cartilage that cushions the joint eventually becomes brittle and breaks down, making the joint more difficult to move. Eventually this may lead to bone erosion and joint deformation. The muscles, tendons and ligaments around an affected joint may also be affected, leading to joint instability.

Unlike many other forms of arthritis which may only affect a single joint or group of joints, rheumatoid arthritis typically presents bilaterally. This means that it will usually appear in the same joint on both sides of the body - if you have RA in one elbow or knee, you will most likely have it in the other elbow or knee as well. The bilateral nature of the condition is one of the key ways in which rheumatoid arthritis is distinguished from other forms of arthritis.

Rheumatoid arthritis is a progressive autoimmune disease, meaning it gets worse over time. In many cases, RA starts in the joints connecting the fingers to the hands or the toes to the feet and may spread from there to the wrists, ankles, knees, hips, elbows or shoulders. The inflammation caused by the autoimmune response may also lead to a number of non-joint related symptoms around the body.

RA is most common in people over the age of 75 and currently affects around 456,000 Australians, or around 1.9% of the population. The rates for rheumatoid arthritis are slightly higher for women than they are for men, with around 2.3% of Australian women being affected as opposed to 1.5% of men.

Another key differentiator is that people living with RA typically experience both flare ups (exacerbations) and periods of remission. During a flare, the inflammation, pain and tenderness in joints becomes worse. The trigger for these flares may differ from person to person but may include food allergies, stress, lack of sleep, illness, reaction to medication and the like.

Unlike most other forms of arthritis, another common symptom is fatigue and potential loss of appetite due to the immune response. A low level fever may also be present in people with RA.

In addition to inflammation and pain in the joint, around 40% of people with rheumatoid arthritis also display symptoms in other parts of the body, including:

In addition to its many symptoms, rheumatoid arthritis may also lead to a number of complications, including:

The earlier rheumatoid arthritis is detected the more effectively it may be managed. If you’re experiencing stiffness, tenderness and pain in your fingers or toes, or you have a family history of RA, schedule an appointment to see your doctor for a test. It may be nothing but it’s always better to be safe than sorry.

The exact reason for the immune system attacking the synovium is unknown. It appears as though there is a strong genetic component to the development of RA but not in a direct way. There is no identifiable gene for rheumatoid arthritis but it appears as though certain inherited or genetic characteristics may make a person more susceptible to the condition being triggered by a viral or bacterial infection or environmental factors.

While an exact cause may not be known, a number of risk factors that increase the chance of developing rheumatoid arthritis have been identified, including:

Emergency workers exposed to dust from the collapse of the World Trade Centre have exhibited increased rates of autoimmune conditions including rheumatoid arthritis.

Treatment for RA typically involves one or more of the following - physical therapies, medication and surgery.

Exercise to increase mobility and to strengthen the muscles around affected joints is a proven method of managing some symptoms of rheumatoid arthritis.  A regular exercise plan put together by a physiotherapist or exercise physiologist also reduces the risk of developing other health complaints that may result from inactivity, such as obesity and Type 2 diabetes.

The exact form of exercise may vary from person to person depending on the severity and location of the rheumatoid arthritis.

An occupational therapist may work with a person living with rheumatoid arthritis to help discover ways of performing tasks in a manner that puts less stress on affected joints. An OT may also recommend specialised tools made to be easily used by people with limited movement, such as cutlery with large ergonomic handles that are easy to grip with little strength, button hooks and other dressing aids, benches in showers and the like.

A combination of medications may be recommended to both help manage pain and inflammation as well as modify the immune system to reduce the instances of flares.

Depending on the progress of the joint damage, surgery may become a treatment option.

If you’ve been diagnosed with rheumatoid arthritis, book a consultation with a physiotherapist to help strengthen your joints, increase mobility and increase your quality of life. The fastest and easiest way to search for and book medical appointments online is through MyHealth1st.

Osteoarthritis may affect any joint in the body but it is most commonly seen in the hands, knees, hips and spine. As the cartilage at the end of bones wears away, the bones themselves rub against each other, leading to degeneration of the joint, inflammation, pain and stiffness. It is a progressive condition, meaning that the symptoms become worse with time.

MTSS is a painful condition commonly related to exercise. The colloquial term for the condition, “shin splints” refers to the most common symptom associated with them - aches or pain along the tibia (shinbone), between the knee and ankle, most commonly at the lower one third of the bone.

What is Sever’s Disease (Calcaneal Apophysitis)?

Sever’s disease, also known as calcaneal apophysitis, is the most common cause of heel pain in physically active children and adolescents. It is a form of bone injury in the heel, in which the growth plate to which the Achilles tendon is attached becomes inflamed and sore.

Why Do My Feet Hurt?

With the complexity of the foot and the amount of stress they can be put under from walking, standing, exercising and the like, it’s no wonder that there are a number of common foot injuries and ailments that can lead to discomfort, pain or even a loss of mobility.