What is Colour Blindness? 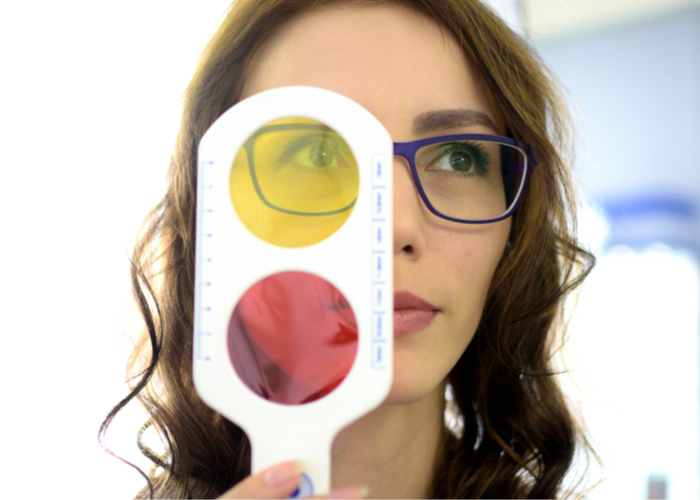 More appropriately referred to as Colour Vision Deficiency (CVD), colour blindness is not related to blindness at all, but rather is a deficiency in the way you see colour. The condition is far more prevalent in men than women, with around 8% of men having some form of CVD and only around 0.4% of women showing any signs of CVD.

Resulting from either protanomacy or deuteranomaly, red-green CVD makes it difficult for people with the condition to differentiate between red and green hues as well as altering perception of other colours such as pink, purple, orange or yellow. There are some variations between red and green colour blindness. People with irregular red cones will commonly have trouble differentiating some shades of red from black, dark brown with dark green and some shades of green with some shades of orange. People with irregular green cones are likely to confuse mid red with mid green, bright green with yellow, blue-green with grey or pink, and light blue with lilac or light purple.

The result of tritanomaly, blue-yellow colour vision deficiency is rare, only affecting around 1 in 10,000 people. Unlike other forms of colour vision deficiency, inherited tritanomaly isn’t linked to the X chromosome, so it’s equally present in both females and males. People with blue-yellow CVD will commonly have difficulty differentiating between yellow and pink, grey or light purple, light blue and grey, deep purples and black, and green and blue.

Very rarely people are unable to perceive colour at all. This condition, known as monochromacy or achromatopsia only affects around one in 33,000 people and renders them incapable of seeing any colour, instead presenting all vision in shades of grey, kind of like a black and white movie that you can’t turn off. The condition is caused in one of two ways - either through a deficiency in two types of light cones, or through a deficiency all three forms of light cone leaving only rods in the retina. Cone monochromats - people with both rods and one kind of cone in the retina - can’t see any colour but typically have good pattern vision in normal light levels. Rod monochromats - people with only rods in the retina - are unable to see normally in daylight and often have to wear dark glasses around any kind of illumination.

While many people with a form of colour vision deficiency can function perfectly normally and may not even know they have the condition, there may be some difficulties that pose a problem with work or everyday activities. While there are few avenues that are cut off for colour blind people in Australia, there may be some additional restrictions placed upon them. For example, there are no restrictions on obtaining a driver’s licence for most people with colour vision deficiency, but some red-green colour-blind people may be restricted from driving at night due to difficulty reading traffic lights. Certain positions in the defence force or police may not be available to those with CVD. You must also pass certain colour vision tests to become a pilot.

If you’d like your colour vision tested, the easiest way to book an appointment with an optometrist near you is to book online with MyHealth1st.

Outside of inheritance there are a number of factors that can lead to different forms of colour blindness. These potential causes include:

“Simple” colour vision deficiency is relatively safe. You’re typically born with it, and it doesn’t change as you grow up and age. So if you do notice any changes to your colour vision, you really should check with your optometrist, as there may be more serious underlying changes that may need treating.

Treatment for an Living With Colour Vision Deficiency

There is no current cure for hereditary colour vision deficiency, but there is a potential genetic treatment still undergoing testing. Gene therapy has been shown to have a positive effect on red-green colour blindness in adult primates , but it will still be some time before human trials.

For some people, vivid colour vision can be achieved through the use of special lenses that filter wavelengths of light giving users the ability to more easily differentiate between colours giving them the ability to perceive colour in a much clearer way. While not necessarily a “cure” for colour vision deficiency, being able to better understand the differences between hues allows people with the condition to do some things that people with typical colour vision take for granted.

Are You at Risk of Developing Glaucoma?

Glaucoma is the name of a group of eye disorders that affect the optic nerve. The optic nerve is a bundle of around one million nerve fibres that transmits signals from the eye to the brain. Any damage to optic nerve tissue results in a corresponding loss in vision. The most devastating thing about glaucoma is that it can cause serious visual damage, usually without any noticeable pain or other symptoms. Glaucoma can really be the silent thief of sight.

Astigmatism: The facts you need to know

In April 2019, a simple tweet from Unusual Facts went viral and sent the Twittersphere into a spin about the state of their eye health. The tweet showed two images side by side. In the first image, the brake lights and traffic lights were streaked; in the second image, they were not.

Eye Health and the Macular Menu

Ageing and lifestyle can have an impact on your vision, but there are things you can do to improve the health of your eyes. While we’re still unsure about the underlying causes of age-related macular degeneration (AMD), we do know how to reduce the risks of developing the disease.

Keeping your eyes healthy should be a priority for all Australians, as catching eye diseases early can often limit damage. Age-related Macular Degeneration (AMD) is the leading cause of legal blindness in Australia, accounting for around 50% of all blindness. While AMD is quite common, it’s possible to reduce the risk of losing your sight by adopting a healthy lifestyle and having regular eye checks.

Do you need to see an optometrist?

Looking for an optometrist near you?

Looking for an optometrist near you?