Everything You Need To Know About Gout 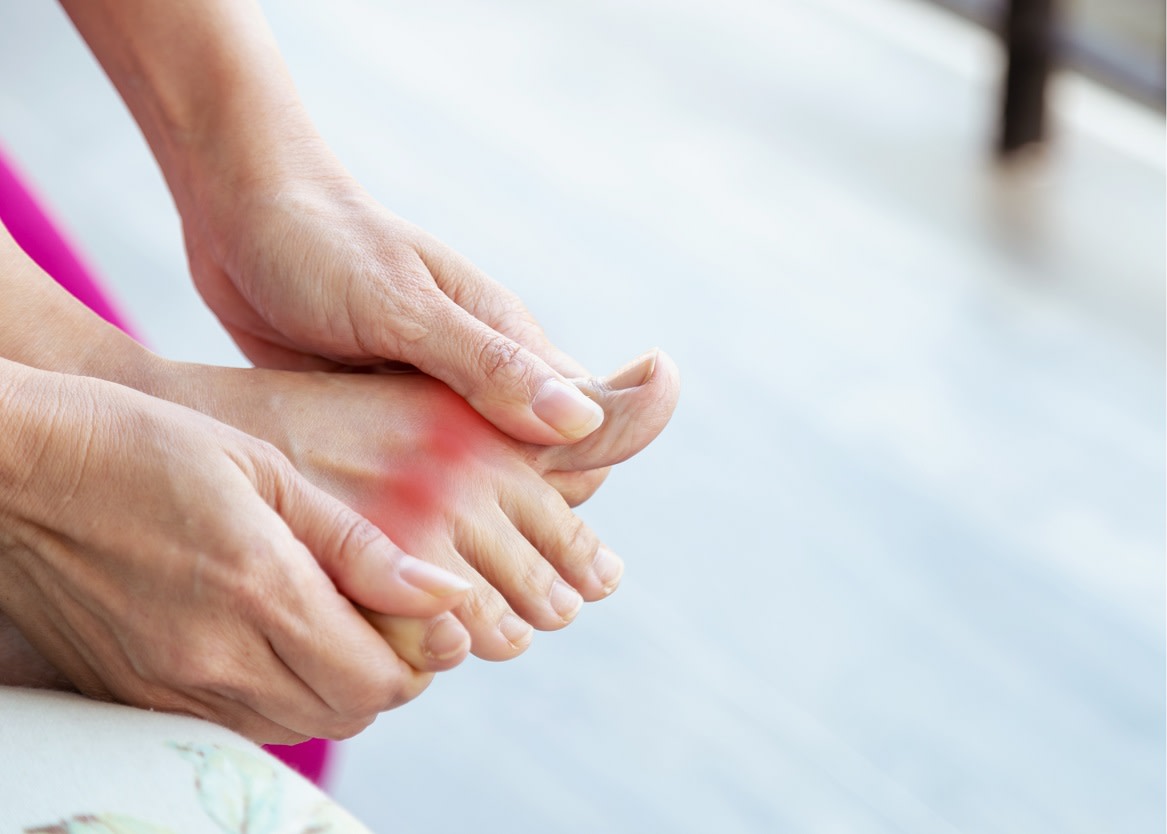 Gout is a common form of arthritis that is characterised by a sudden and intense onset of pain, inflammation and tenderness of joints caused by a buildup of uric acid (urate) crystals. The joint at the base of the big toe is often the first joint to experience gout, but any joint may be affected.

An attack of gout may occur at any time, from when you’re walking around or performing day to day activities to when you are asleep. No matter when the attack occurs, the pain is intense and often described as burning. The tenderness of the affected joint is such that the weight of a bed sheet may be excruciating, let alone trying to walk around.

Any joint may be affected by gout, but it is most common in the big toe, but it may also appear in the midfoot, ankles, knees, elbows and hands. It is one of, if not the most common form of inflammatory arthritis. Men are around three times more likely to develop gout than women, with men over 40 and women post menopause being the most at risk groups. The incidence and severity of gout are increasing and starting at an earlier age.

One of the major differentiating factors between gout and other forms of arthritis is the speed at which it presents. Most forms of arthritis develop slowly, with people only experiencing mild symptoms in the early stages. Gout is marked by its sudden and intense onset.

In addition to sudden, intense, burning pain, gout may also cause a number of other symptoms, including:

In addition to the pain of attacks, having gout may lead to a number of complications, such as:

The body produces uric acid when breaking down purines, an organic compound found naturally in the body as well as a number of foods. Typically uric acid is filtered out of the blood by the kidneys and excreted in urine or faeces.

If the kidneys don’t filter enough uric acid from the blood, or for some other reason the body processes too many purines, this leads to a condition known as hyperuricemia (high levels of uric acid in the blood). In some people, this leads to the uric acid becoming deposited in joints and forming sharp, needle-like crystals in the joints or surrounding tissue leading to inflammation and intense pain.

A number of factors may increase the risk of hyperuricemia and gout, including:

If you’ve experienced sudden, intense, burning pain in your big toe, don’t ignore it - book an appointment with a podiatrist .

Gout may be prevented or attacks limited by adopting a gout friendly healthy diet. Before entering into any diet they should be discussed with a doctor or dietician, but a gout prevention, low purine diet typically includes dietary changes such as:

Limit alcohol intake but drink plenty of other fluids (especially water)
Alcohol may increase production of uric acid but staying well hydrated may help flush uric acid from the blood.

A number of medications are used to treat gout, both during attacks and to prevent attacks or complications. Commonly used medications include:

Non-steroidal Anti Inflammatory Drugs (NSAIDS)
Both over the counter NSAIDS (such as ibuprofen) as well as stronger prescription drugs may be used to ease pain during an attack.

Colchicine
A pain reliever proven to effectively control gout pain. Colchicine may also be used in small doses to reduce the chances of recurring attacks. Unfortunately the drug has a number of possible side effects including nausea, vomiting and diarrhea.

Uricosurics
These drugs improve the kidney's ability to remove uric acid from the body, reducing the risk of gout or repeated attacks.

XOIs
Xanthine oxidase inhibitors limit the body’s ability to produce uric acid, reducing the risk of gout or repeated attacks. XOIs may have a number of side effects including nausea, reduced liver function and increased risk of heart related death.

Although gout may not be surgically treated, surgery may be necessary to repair or limit joint erosion caused by untreated gout, or to treat complications like tophi or kidney stones.

If you are experiencing sudden, intense pain in other joints, like your hands or elbows, schedule a consultation with a doctor . The fastest and easiest way to get the medical help you need, when you need it is to search and book online with MyHealth1st.

Clinical Director/Senior Podiatrist - ModPod Podiatry
Reid is originally from New Zealand where he trained and practiced until immigrating to Sydney in 2009. Reid is the clinical director of the ModPod Podiatry North Ryde practice, and enjoys helping all of our clients with their health needs

What is a Gait Disorder?

A gait disorder is anything that leads to a change in gait. A wide number of conditions may cause gait change, from biomechanical issues in the feet or legs, to problems with nerves, the brain, eyes, inner ears and more.

What is Bursitis of the Foot?

MTSS is a painful condition commonly related to exercise. The colloquial term for the condition, “shin splints” refers to the most common symptom associated with them - aches or pain along the tibia (shinbone), between the knee and ankle, most commonly at the lower one third of the bone.

Why Do My Feet Hurt?

With the complexity of the foot and the amount of stress they can be put under from walking, standing, exercising and the like, it’s no wonder that there are a number of common foot injuries and ailments that can lead to discomfort, pain or even a loss of mobility.