Everything You Need to Know About Neck Pain 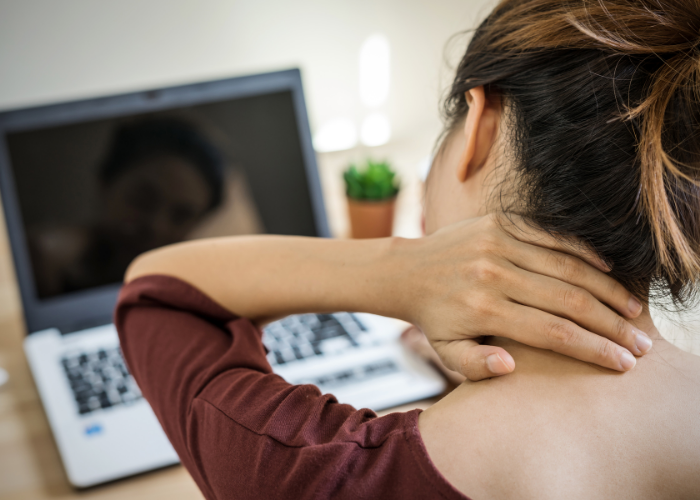 The neck, or cervical spine, is made up of seven vertebrae (neck bones) that are stacked on top of each other.  Each vertebra is separated by a disc and two facet (zygapophyseal) joints, and connected to other vertebrae by ligaments. It’s a highly mobile structure, thanks both to the number of vertebrae as well as the surrounding muscles, but due to this flexibility, the neck can be prone to damage and pain.

Poor posture, trauma and forms of arthritis are all common causes of pain in the neck. For some pain is fleeting, but for others it may be a chronic condition, but there is hope. There is a good deal of evidence that exercise and physical therapies such as those offered by a physiotherapist may be able to relieve a variety of neck pain caused by a number of different conditions.

The most common form of arthritis, osteoarthritis affects the vertebrae when the discs in the spine break down. Without the cushioning disc, the vertebrae wear against each other, leading to symptoms including pain, stiffness, swelling, loss of flexibility and bone spurs. While the symptoms of the condition can be treated with medication, physiotherapy and exercise, damage to the joints cannot be reversed.

A kind of inflammatory arthritis that affects the spine. Cervical (neck) spondylitis is an incurable condition that can cause the vertebrae to fuse together, limiting flexibility in the spine and leading to pain in the spine, neck and joints. While incurable, spondylitis can be treated with a combination of exercise and medication designed to reduce pain and increase flexibility.

Also known as cervical osteoarthritis, cervical spondylosis is a common form of age related degeneration of the bones and discs in the cervical spine (neck). In addition to normal wear and tear on the bones and discs in the neck, spondylosis can also be caused by injury, herniated discs and other damage to the neck. Common symptoms include pain in the neck and shoulder blades. This pain can sometimes also radiate into the arms and hands.

Another form of arthritis, cervical stenosis is a narrowing of the channel through which the spinal cord passes. This narrowing puts pressure on the spinal cord, which can lead to pain and weakness in the limbs, problems with balance, and neck pain.

Cervical stenosis is usually treated with pain relieving medication and physiotherapy to increase strength and coordination. In severe cases surgery may be a necessary option. This surgery involves removing some bone and ligaments from the vertebrae to free up space around the spinal cord.

A sprain is a stretch, twisted or torn ligament. The seven cervical vertebrae are all connected by ligaments and muscles. A neck sprain occurs when the neck is forced into an extreme position, typically through impact or a sudden movement, stressing the ligaments connecting the vertebrae.

Pain from a neck sprain typically peaks around a day after the traumatising event, and is mostly located around the back of the neck. The pain will usually become worse with movement. Muscle spasms in the shoulders, headaches, numbness or tingling in the hands and arms and restricted motion in the neck are also common symptoms.

If you suffer from neck pain and stiffness, don’t ignore your body and get some professional help. Schedule an appointment with a doctor , or book a consultation with a physiotherapist to get some relief.

A strain is a stretched or torn tendon or muscle. There are more than 20 muscles in the neck and upper back, responsible for supporting the head in an upright position as well as facilitating the movement of the head, neck, shoulders, jaw and upper back. When the fibres of one of more of these neck muscles or their tendons are torn, this is referred to as a strain, sometimes also known as a pulled muscle.

A specific form of neck strain caused by the sudden movement of the head forward, backwards or from side to side beyond the normal range. This sudden and exaggerated movement causes damage to the soft tissues - muscles, tendons and ligaments - of the neck, causing pain in the neck and shoulders as well as some potential more serious symptoms.

These serious symptoms include a loss of movement in the neck, dizziness, difficulty swallowing, weakness, vertigo and tinnitus. Whiplash is typically caused by car accidents but can also be caused by impact to the head or neck, or a fall.  Recent research has also shown that whiplash injuries can cause concussion.

Ergonomic injuries are often caused by small, repeated traumas to muscles, tendons, ligaments, blood vessels or nerves due to the workplace or environment not being suitable for the task at hand. One of the most common causes of ergonomic injury in the neck is poor posture .

Having insufficient back support in a chair, a chair or desk being at an inappropriate height, monitors being at the wrong height and the like can all cause the neck to be held in an awkward position for long periods of time, putting stress on the muscles, tendons and ligaments of the neck.

Around one million people in Australia are living with osteoporosis . The condition is typified by the rapid loss of minerals from bones. When bones lose minerals faster than the body can replace them, they become thin and brittle and can break easily. While not strictly a spinal issue, vertebral fractures are a common symptom of the condition. Women are more likely to develop osteoporosis than men.

A disorder resulting from severe compression of the spinal cord. Myelopathy can occur anywhere in the spine, with the name and symptoms changing depending on location. Cervical myelopathy is the most common form of the condition and can affect balance, sensation in the arms and hands, strength, fine motor control and coordination. Treatments for cervical myelopathy typically involve physical therapies, manipulation and exercise.

The vertebrae in the spine are cushioned by spongy discs that allow for flexibility and movement in the spine. These discs are made up of two parts, a soft, jelly-like centre (the nucleus) and a tough, rubbery exterior (the annulus). A herniated disc, sometimes referred to as a slipped disc or ruptured disc, occurs when the annulus ruptures or splits and some of the nucleus bulges out and puts pressure on nearby nerves.

Herniated discs can occur anywhere in the spine, with symptoms varying with location of the hernia. Herniated discs in the cervical spine typically have symptoms including numbness, weakness or tingling in the hands and arms, facial numbness or tics, and pain. Physiotherapy is still the first point of treatment for this injury, but injections, or surgery can also be implicated.

This age related condition occurs when one or more discs breaks down or deteriorates, leading to extra pressure on the vertebrae and pain. Although called degenerative disc disease, the condition is not actually a disease but rather a culmination of natural factors causing the deterioration of discs, such as drying out with age or herniations from injury or repetitive strain.

While neck pain is a typical symptom of meningitis, it usually also presents with other symptoms such as a rash, fever, intense headaches, muscle spasms, nausea, vomiting, sensitivity to bright light (photophobia) and fever.

Acute torticollis, otherwise known as wry neck is an acute (short term) neck pain typically caused by sleeping in an awkward position, a sudden jerk or turn of the head, carrying unbalanced loads, like a suitcase, bag or pack slung across one shoulder, or, in some cases, viral infection.

Wry neck is most common in teenagers and young adults but can occur in people of any age. Symptoms typically include pain in the neck that becomes worse when turning it to one side or the other, muscle spasms in the neck and stiffness.  Wry neck responds particularly well to manual physiotherapy techniques.

Fibromyalgia is a collection of conditions that lead to chronic muscle pain and generalised stiffness around the body. While any muscle may be affected by fibromyalgia, pain and muscle stiffness frequently presents in the neck and shoulders.

What is a Physiotherapist and When Should I See One?

Physiotherapists are Allied Health professionals specialising in the structure of the human body, it’s mobility and overall optimal function

What is the Difference Between a Strain and a Sprain?

Strains and sprains both refer to soft tissue damage - in the case of sprains and strains this is damage to the muscles, tendons or ligaments

Muscular and Joint Pain - Why Does Everything Hurt?

Muscular and joint pain, or body aches are a common symptom of many ailments and conditions. Pain can be caused by injury, strain, stress or by the body fighting off infection. When the body fights an infection like cold or flu, your immune system produces a number of chemicals that help fight the infection. One of these chemicals, prostaglandin, can cause aches and pains throughout the body as well as fever.

What is Tendinopathy and How is it Treated?

Tendons are bands of strong fibrous tissue made of collagen that connect muscles to bones or other parts of the body. Tendinopathy is any disease or disorder of a tendon